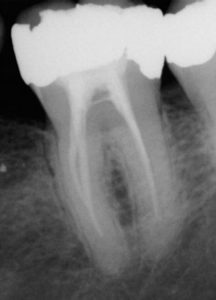 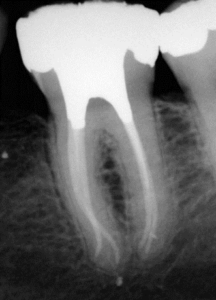 Patient referred complaining of pain with heat from previously root filled LL6. The pulp chamber roof was still present, the obturation was short of the radiographic apices and a missed disto-buccal canal was evident. The apical periodontal ligament spaces were intact. A diagnosis of irreversible pulpitis and incomplete root canal treatment was made. The patient requested retreatment of LL6.

On access the pulp chamber roof was removed and the disto-buccal canal was found. The root filling was removed and the apical curvatures were carefully negotiated. The four canals were chemo-mechanically debrided and obturated with warm vertical compaction of gutta-percha and sealer. An amalgam core was placed in the access cavity. The symptoms resolved and provision of a cuspal coverage restoration was recommended.